What does FAI Triangle Assistant do?

You don't have to do much to use the FAI Triangle Assistant. Just turn it on and fly is how we tried to design the assistant. Here's how it works.

Turning the FAI Assistant on or off follows the same philosophy as toggling the Map, Waypoints, Airspace, Navboxes etc and is controlled via: the Display Options dialog. 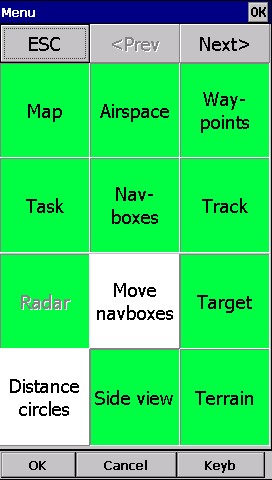 The FAI Triangle Assistant is designed to help make an FAI triangle ‘on the fly’ or while you are in the air, without having fully determined your flight plan and waypoints in advance.

Once the FAI Area is on, you don't have to do much as it will simply follow what you are doing, although you do need to know roughly which direction you would like to fly your triangle.

As you fly the first leg, assistant won't yet know which way you are going to fly, so the FAI Area will be randomly drawn on one or other side of the first leg. If you would like it to be on the other side, simply tap inside the area and it will rotate. (Note: provided that "Rotate on click" is still enabled in the settings, which by default it is).

Once you have turned your first waypoint, continue to fly towards your next waypoint or area within which you would like to turn your second waypoint.

As soon as the triangle you have flown is deep enough, the FAI Area changes and is no longer drawn on the longest leg but instead on the last leg you have flown. The assistant then indicates the area within which making a second waypoint will allow the flight to be logged as an FAI triangle.

When you near your second waypoint you will appreciate some help from the FAI triangle optimization Navbox. Configure it to show on-screen to know exactly how large the triangle will be if you can successfully finish it.

After you have flown as deeply into the second area as you wish, head home. The FAI Triangle optimization graphic should not change anymore - it's just about getting home and closing the triangle.

The above example focused on an FAI Triangle started from one of its corners. Flying a triangle starting on a leg is no different, except the second waypoint at which you turn represents the first point from the example above.

You may want to rotate the FAI area from its current position.

Simply tap on the FAI Area on the moving map and it will rotate. If you are far enough on the second leg to make it obvious which way you are going to fly the triangle, it will rotate around the legs.

This functionality is enabled in the settings ˝Rotate on click˝, by default it is set to on.

An FAI Triangle is not finished unless you fly back to your start point.

FAI Triangle Assistant helps you identify the exact course to fly by highlighting a cylinder around the closest available finish point.

Note: FAI Triangle Assistant  is mathematically limited and practically cannot assist where you begin your flight within the area of your triangle. For such a flight plan, you would want to plan it in advance.

If you would like to influence the look and feel of the FAI Triangle Assistant you may do so. 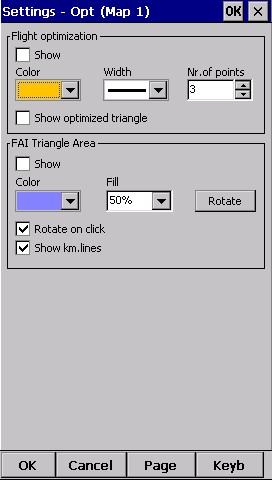 Example below shows kilometre lines for Triangles between 80 - 120 km. If you fly into the violet area the triangle will become an FAI triangle. 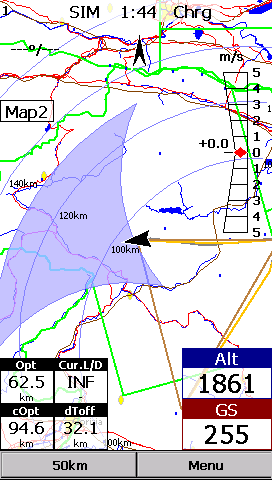